Throughout time, eclipses have captured humanity’s attention and were mostly feared until we became accustomed to their cyclic repetition at full or new moons, every six months.

Yet the ancient sense of fate associated with eclipses still lingers. Is this a hangover from the past or is there something to it? 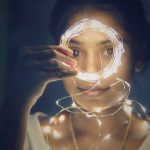 Eclipses have been associated with both high and low turning points and can coincide with peak success moments. Beethoven was a struggling musician until 1809 when his astrology was affected by an eclipse and three patrons supplied him with a life income. The famous artist Van Gogh was inspired into his five most prolific years when coincidentally an eclipse featured in his chart in 1885.

But an eclipse to Nelson Mandela’s chart in June 1964 timed with a life mix that became imprisonment, and the loss of Princess Diana coincided with a solar eclipse to her chart in September 1997. Eclipses can indicate peak energy times for highs and lows, stress or success, when there’s a turning point in the air.

What then can you expect for yourself when an eclipse makes an alignment to your chart? If you know an eclipse is on its way and your intuition is picking something up, it’s a good time to check your astrology. With life’s hidden energies at work, astrology can help pinpoint patterns you and life have been creating over the previous six months.

During an eclipse, when the sun or moon is momentarily blotted out, physical light dims, silence takes over and the energy feels ‘in-between’. Eventually light, sound and warmth return and the mysterious hush passes. Research suggests that more than just an external atmospheric change happens during an eclipse and that our internal body fluids also experience a shift. In the mid-20th century, studies on plant saps during eclipses recorded radical pattern shifts, even when done in locations where the eclipses were not visible.

Even an ordinary full moon heightens positive or negative excitation, and records show that police stations and hospitals often roster on extra staff under full moons.

Willpower or Go Within?

To encourage breakthroughs not stress-outs around eclipse time, it pays to connect within. What’s subliminal might express as creative behaviour and allow greater insight.

We like to think willpower and effort are the key factors influencing our destinies, and certainly they are important, but the soul and its moods and desires are also at play, not to mention the rhythms of life itself.

Remarkably, even after death, a person’s horoscope cycles with eclipse seasons. The diary of Beatrix Potter, author of the Peter Rabbit series, was published in 1966 when an eclipse powerfully aligned with her chart twenty-three years after her death, bringing her and her life’s contribution once again into the public eye.

Go here for this year’s eclipse dates and information on the astrology of eclipses.