Dates of 2021 Supermoons later (below)

Because the moon’s orbit around the earth is not an exact circle, there are key times in the year when the moon is closer to the earth than other times (perigee) or further away (apogee). At the closest times, supermoons are possible and there are usually four to six supermoons a year. The moon looks bigger at supermoons and causes bigger tides. The bigger tides happen even at non-visible new moon supermoons.

Can New Moons Be Supermoons?

Astrologer Richard Nolle coined the term ‘supermoon’ and included New Moons too, as now do many astronomers.

What Are Some Supermoon Effects?

With energies amplified and energy fields more ‘electric’, everything from heightened creativity to crossed wires to stronger soul information is possible. Generally after a supermoon it helps to allow a few days to discern what is wishful thinking/illusion from a genuine mind-body-spirit need before making lasting decisions. 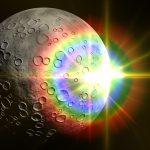